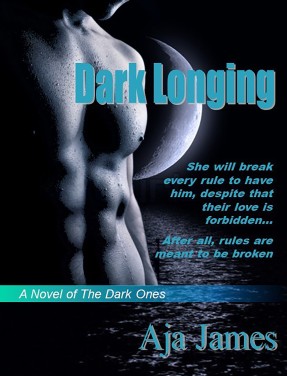 “Every story has more than one side, like a crystal that captures and reflects different colors of light. Do not take for granted what you think you know, for until you hold the entire jewel in your palm, the temptation is to fall prey to illusion and deception.”

This is a story of the Dark Ones…

Known as the Angel of Death among her kind, she has lived millennia alone, one of the remaining True Bloods in existence, unconsciously longing for the one male she could never have.

His soul recognizes hers from the first encounter. With the first touch, he is awakened. Though he does not know it, he has been searching for her across the ages.

But even as they are finally reunited, their love faces seemingly impossible odds. Will history repeat itself or will they break all the rules and chart a new course together?

He turned now to face the woman who had saved him.

“You turned me into a… Dark One,” he stated, rather than asked.

She gave one slow nod, holding his gaze intently.

She inhaled long and deeply and kept her position by the sliding doors, as if she wanted to run from him but knew that she had to stay. She seemed always to run from him.

“When you died, before your soul departed your body, I gave you my blood to keep you there.”

Said so matter-of-factly, without any inflection or change of expression. When you died. I gave you my blood.

“That’s all it takes to make vampires out of humans?” Gabriel wondered why there weren’t more bloodsuckers running around.

She shook her head. “A vampire would have to share a part of her soul with the human. In most cases, the human’s soul has already departed, because the process of forcing another consciousness into the body is very… arduous. The result of typical turnings is that the vampire loses part of herself in the human shell, and the new vampire is not quite whole. Both the creator and the creation could turn to madness if they do not control themselves, if the shared soul is not strong enough.”

“In most cases,” Gabriel picked up on her phrasing, “but not in mine.”

She did not reply for a long time. He did not prod her. If he was truly what they said he was, he could afford to keep waiting.

“Not in your case,” she finally agreed and said nothing more.

He continued to stare at her, but she did not seem to have the inclination or will to continue. Her eyes flickered as if she lacked the courage as well.

“And how does it work, exactly, if my body is now crowded with more than just my own soul?” he asked quietly. There was no way he would let her escape from answering.

She swallowed as her eyes lowered momentarily, her long, gold-tipped lashes fluttering as if she were fragile and vulnerable.

Gabriel clenched his jaw as the ridiculous desire to comfort her almost overwhelmed him.

When she looked back into his eyes, he saw a steely determination there, as if she were bracing herself for retribution against a wrong she’d committed but was not sorry for.

“We are Bonded, you and I, until one of us perishes,” she stated in a clear, steady voice. “In my Kind, we would be called Blooded Mates. In the human world, I suppose the closest thing would be marriage, except there is no divorce, no going back.”

Ironic, that, Gabriel thought. Just a while ago, Benji had wished for their marriage.

“And I had no say in this?” his words were but a whisper, seemingly innocuous yet lethal.

Was it his imagination or did her deep blue eyes fill with unshed tears? Gabriel ground his back molars. There went that stupid instinct to protect her again, even against his own inquisition.

“I am sorry,” she said huskily, and he felt her pained contrition as if it were his own. “No, you did not choose this path consciously. You were beyond choice at that point. I am solely accountable for the decision.”

Gabriel took a step toward her, so that mere inches separated them.

He braced an arm beside her head, his hand on the sliding doors behind her, and leaned in so that she was barricaded by the lean, muscled wall of his body, his heat surrounding them both, his breath fogging the air between their faces.

“Why me,” the question was more of a statement, a low, rumbling rasp that raised the baby fine hairs all over her skin.

Inanna could have prevaricated.

She could have given him half-truths.

But the truth was none of those things.

When she Bonded him to her, Mated them to each other, she had been thinking of none of those things.

Only one word blocked out all else in her mind: Mine.

“I wanted you,” she said at last, holding his mesmerizing gaze. “So I claimed you.”

His pupils dilated at her words, fleeting expressions of confusion, fury and lust chasing each other across his face.

She closed the last bit of distance between them until they were flush against one another, chest to chest, thigh to thigh, the chunky heel of her combat boots giving her extra height to almost match his. Her lips were exactly level with his jawline, so she rested them there as her arms came around his back, her hands flattening against his spine, then traveling downwards until they each cupped one of his buttocks and exerted pressure enough to bring his groin into the notch between her legs.

“I want you,” she breathed against his throat, the whispered words like a vow that sealed their fates.